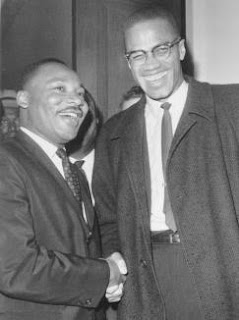 “How long? Not long. Martin and Malcolm knew they didn’t have much time. In Benjamin Mays’ famous poem he illuminates how time is fleeting: ’60 seconds in a minute, a lifetime depends on it.’ In the average lifespan of 70 years, people will spend 23 years sleeping, 16 years working, 8 years watching television, 6 years eating, 6 years commuting, 4 1/2 years for leisure, 4 years ill, 2 years dressing, and 6 months involved in religion.

How long? Not long. Sixty seconds in a minute Martin Luther King knew he didn’t have much time. He graduated from Booker T. Washington High School at 15, Morehouse College at 19, Crozier with a master degree at 22, Boston University with a doctorate at 26, and died at 39. Thirteen years to try to save the world. It is not how long you live, but what you do while you are alive.” -From, “Sankofa: Stories of Power, Hope, and Joy” By: Jawanza Kunjufu