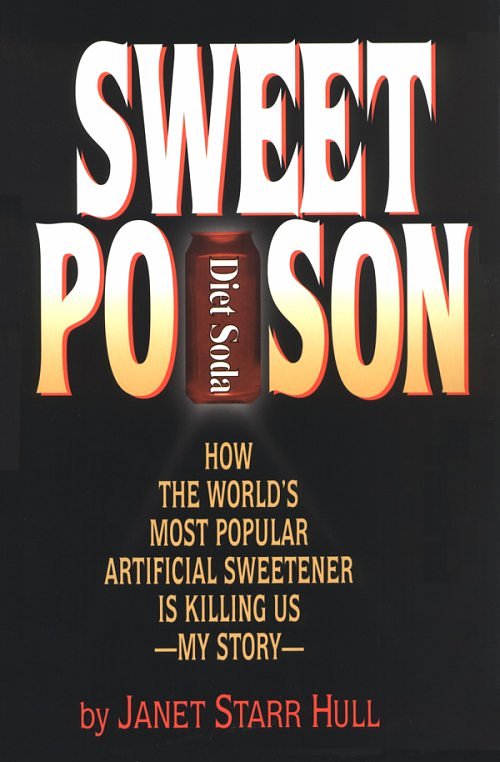 “Sweet Poison: How The World’s Most Popular Artificial Sweetener Is Killing Us- My Story,” By: Janet Starr Hull is a tome that was published in 1999 but is still shockingly relevant today. In this book, the author engagingly recounts how she discovered the deadly dangers of ingesting foods that are plied with toxic artificial ingredients.

When the author; a young, educated, vibrant, exercise enthusiast, and working mom; fell ill, she sought to heal herself and find the culprit behind her sudden sickness. What she discovered was a lesson that the world needs to imbibe and implement.

When the 30-something year old mother and wife, Janet Hull, became overcome with symptoms of: severe mood swings, headaches, insomnia, hair loss, rapid weight gain despite a rigorous workout schedule, heart palpitations, seeing blinding flashing lights due to retinal tearing; she sought medical care. Her physician diagnosed her with Graves’ disease, put her on medications, and told her the solution to her problem would be for her to “kill her thyroid” by irradiating it. This irradiation would involve her taking radioactive pills until her thyroid was rendered “dead.” Then, she would be given medication that she would have to take for the rest of her life. This diagnosis did not sit well with the author. While she took the medication her doctor prescribed to her, she didn’t wan to undergo the drastic process of “killing her thyroid” until she had exhausted seeking other alternatives. What the author found from her search was life-saving and eye-opening.

Thinking back to when her symptoms started to emerge and her corresponding behaviors around that time period, the author recalled that she had begun to add some new snacks to her daily menu. Being a mother of three children under the age of four, an aerobics instructor, and an adjunct professor left the author bereft of time. She thought she was complimenting her on-the-go lifestyle when she began to substitute meals with “fat-free” and “sugar-free” energy snacks. At the same time, she began her habit of downing several diet sodas during the day. Recollecting this routine raised a red flag.

Janet Hull did an experiment. She immediately stopped drinking “sugar-free” diet soda. Lo and behold, her symptoms began to dissipate. Ms. Hull decided to investigate the contents of the diet soda she had become so fond of routinely drinking. What she discovered was revelatory. She found that an ingredient in the beverage was acting as a toxin to her system.

The diet soft drink contained NutraSweet aka Equal (Scientific Name: Aspartame). Her research revealed that aspartame is made up of compounds that can be dangerous and destructive to the human body. In “Sweet Poison,” the author states that aspartame is composed of 50% phenylalanine, 40% aspartic acid, and 10% methyl alcohol. The author reveals that aspartic acid can cause brain damage. Methyl alcohol, also known as wood alcohol, can cause eye problems and turns into embalming fluid when it is heated.

The artificial sweetener is said to have originally been created to be an ulcer medication. However, its U.S. patent was revoked in 1974 when it was found that the compound caused holes in the brains of lab animals. According to my research, Huffington Post states that aspartame was “previously listed by the Pentagon as a biochemical warfare agent.”

Janet Hull states that ingesting aspartame can cause over 92 different severe symptoms that can vary from person to person due to the fact that after being dissolved by the body aspartame’s “toxic by-products can be deposited anywhere [in the body]. Usually in the [body’s] weakest spots. Despite the government being aware of the alleged toxicity of aspartame, they continue to approve its use in food products consumed by their citizens. Because aspartame is said to be at least 180 times sweeter that sugar, it is a cheaper sweetener substitute that sugar can ever be. It all comes down to the money.

I highly recommend that people thoroughly read “Sweet Poison: How The World’s Most Popular Artificial Sweetener Is Killing Us- My Story.” This book will undoubtedly encourage the reader to carefully examine the foods that he or she eats. It will also motivate the reader to seek to implement truly healthy eating habits. Read this book and educate yourself and your family on how to eat in a way that is beneficial to your body. As the saying goes, “food can either be your medicine or your poison.”