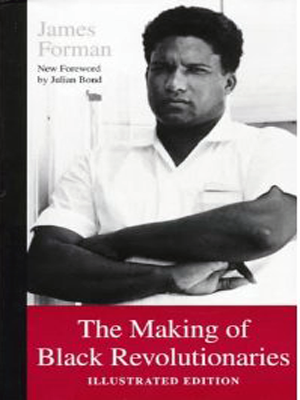 “The Making of Black Revolutionaries,” By: James Forman is not a book about the heroics of the author. It is a tome about the collective daring of a people who defended their right to be.

Throughout “The Making of Black Revolutionaries,” James Forman tells the stories of many unsung heroes and heroines who stood up against the unwarranted brutality Black people were subjected to. These selfless warriors, who were not individually acknowledged by the annals of history, were motivated by the desire to make things better for the next generation. They courageously relinquished employment, basic comforts, and physical safety in their quest. The tales that Mr. Forman recounts reinforces the notion that it was the everyday citizens of various communities who helped propel the “civil rights movement” forward.

While James Forman’s book also tells of his personal struggles of being a Black man in America and his motivations for adopting a revolutionary mindset, the bulk of his autobiography/historical account is dedicated to discussing a specific time period and how Black people sought to organize and grapple with the conundrum that was America.

“The Making of Black Revolutionaries” holds great value for people who wish to exam past political organizing strategies and their effectiveness. Mr. Forman deftly includes cautionary advice to the next generation who may seek to learn from his generation’s organizational errors. He examines: Nonviolence vs. Self-defense, internal conflicts in an organization and its affect on a political movement, reform organizations vs. revolutionary organizations, including White people in Black-focused organizations, the detriment of the lack of constructive criticism of organization leadership, the destructive nature of the fear of power, the trickery of government agents, and more.

For history buffs who have an interest in “civil rights leaders” and activists from the 1960s and 1970s who were noted and acknowledged by the media and other historical tomes, “The Making of Black Revolutionaries” also abounds with accounts of their lives and political activism. Stokely Carmichael, Robert Williams and Mabel Williams, Martin Luther King Jr., Malcolm X, Harry Belafonte, Fannie Lou Hamer, and other leaders of their ilk are mentioned.

“The Making of Black Revolutionaries” is a great resource that can be used to analyze what makes a political movement weak, and what makes it strong. It is also a great documentation of how organizations are formed, fortified, grown, and destroyed.