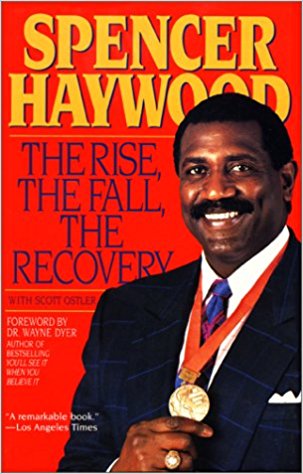 I definitely recommend this book. It was a great read.

Here are some interesting tidbits from, “The Rise, The Fall, The Recovery” By: Spencer Haywood:

• Spencer Haywood had some very interestingly varied life experiences. He experienced the most extreme poverty, as well a fame and fortune.
• He picked cotton in the deep South as a child.
• He poignantly describes the racism that he experienced growing up. His childhood experiences in the deep South, including picking cotton, would have you thinking he grew up in the 1800s, not in the 1950s and 60s.
• He was a trailblazer in many ways, including being the first professional basketball player to go the pros before finishing college. (This involved litigation and a bevy of court cases.) He also pioneered professional basketball players being able to make the high salaries that they make today.
• He became an Olympic gold medalist during the Olympic Games that Tommie Smith and John Carlos famously protested racism in America.
• He played basketball in Venice. He described Venice in a way that makes me want to go there for an extended visit.
• He interestingly recounts his marriage to supermodel Iman.
• He was Nike’s first national representative.
• He was great at investing, although he also got ripped off like a lot of his peers. His investments include ownership in a shopping mall.
• He fell victim to drug addiction. He details the adverse effects of this and how he recovered.
• He studied African history with Dr. Ben. He even traveled to Egypt with him.
• He details how he combated his miseducation, and cultivated his love for Black history.