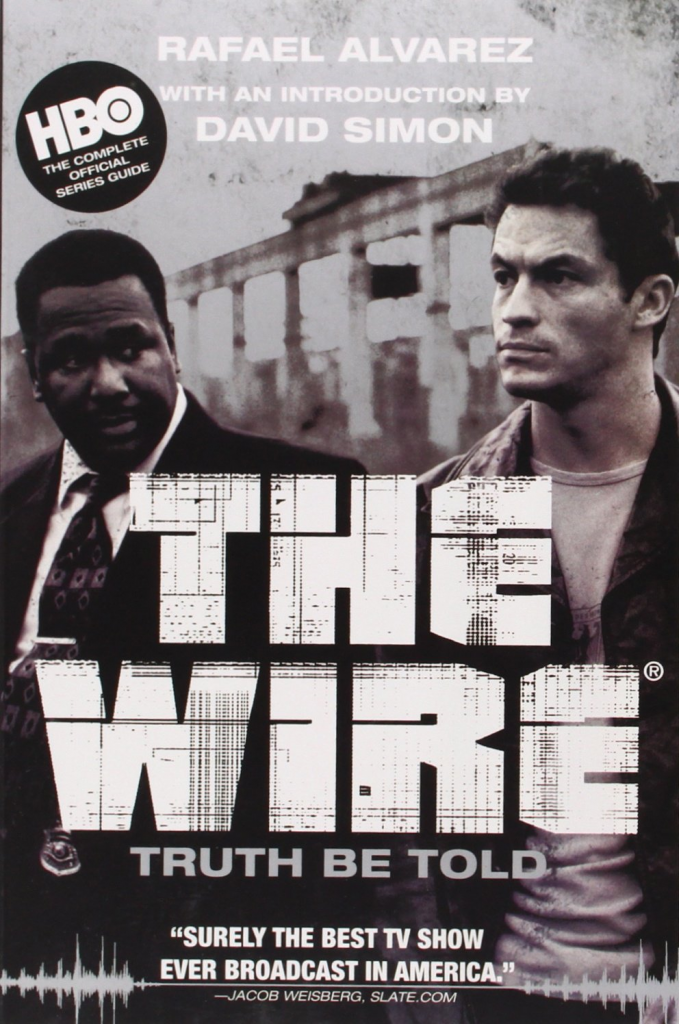 Here are some interesting tidbits from, “The Wire: Truth Be Told” By: Rafael Alvarez:

• Dominic West was cast as Jimmy McNulty via an audition tape where he was saying his character’s lines, and leaving silent spaces where the other characters’ lines would be. When the show’s creators saw his audition tape they “laughed uncontrollably.” After they finished laughing, they sought to hire him.
• The actor who played Detective Ray Cole was actually beloved executive producer and director, Robert E. Colesberry. He died from heart surgery after the second season of The Wire.
• During his presidential campaign, Obama cited The Wire as his favorite television show.
• A lot of the storylines from season one came from a case that was investigated by the show’s writer/producer Ed Burns when he was a homicide detective in Baltimore.
• The Deacon in Seasons 3 to 5 is played by Melvin Williams, a former drug dealer who was once investigated by Ed Burns. Melvin Williams was once sentenced to 34 years in prison.
• The pager/telephone code depicted in season 1, was an actual code used by drug dealers.
• By the time The Wire was filmed in Baltimore, the city’s high-rise housing projects had been torn down. An apartment-complex for senior citizens were used to look like projects on the show.
• Actor Wendell Pierce, who plays “The Bunk,” studied at Julliard.
• The nickname of the real “Bunk” came from him addressing everyone he met as “Bunk.”
• The “hat trick” depicted in Season 1 of The Wire was the creation of the real-life Bubbles.
• The real-life Bubbles started using drugs at 15 years old.
• The storyline where Bubbles switched drugs with battery acid to put an end to being constantly robbed by a neighborhood bully, is something that was done by the real-life Bubbles. However, in real-life the bully takes the switched drugs and dies, along with a friend who did the drugs with him.
• Melvin Williams who plays The Deacon is a math genius who had more than a little luck at games of chance. He states that he was never involved in selling drugs until after he was framed on narcotics charges by federal agents. Melvin Williams was said to be a highly disciplined, intelligent man who never indulged in ingesting drugs or alcohol. He spent 26 ½ years incarcerated.
• The character Ziggy Sobotka was inspired by Pinky Bannon, who wore formal wear to work on the docks. Pinky also had a pet duck that he adorned in diamonds, and plied with liquor at the local bar.
• Actor, Chris Bauer, had to don a fat suit and be cosmetically aged to play Frank Sabotka.
• McNulty’s partner when he is on the marine detail is a real-life marine officer in Baltimore.
• Kurt Schmoke, the mayor of Baltimore from 1987 to 1999, who also became the dean of Howard University Law School, was a politician whose political career was torpedoed when he suggested drug addiction be decriminalized and treated as a health issue. [SIDEBAR: This is telling considering how the “opioid epidemic” is currently being handled.] Kurt Schmoke played a health commissioner on two episodes of season 3 of The Wire.
• The Neville Brothers sang the theme song for season 3 of The Wire.
• There were Baltimore politicians who were not happy with what was depicted on The Wire. Because of this, there were times The Wire had difficulty getting permits to film in the city.
• The actor who plays FBI Special Agent Terrance Fitzhugh is a former Golden Gloves boxer.
• Susan “Tootsie” Duvall, who played Vice Principal Marcia Donnelly is an acting protege of Jean Stapleton, who is known for her role as Edith Bunker.
• Susan “Tootsie” Duvall also worked on doing background sounds on The Wire. As did Fran Boyd, the woman whose life was depicted on the HBO miniseries, “The Corner.”
• The real-life De’Andre McCullough (also depicted on, “The Corner”) played Lamar, Brother Mouzone’s sidekick.
• In 2007, Fran Boyd married Donnie Andrews, the man whose Omar’s character is partially based off of. Donnie Andrews also had a role on The Wire. He was one of Omar’s comrades inside of jail and outside if jail.
• Maestro Harrell, the actor who played Randy Wagstaff, played a young Muhammad Ali in his 2001 bio-pic.
• The actor who played Detective Jimmy McNulty directed episode 57 of The Wire.
• Bill Murphy, Clay Davis’s attorney on The Wire, is actually one of Baltimore’s most prominent attorneys. He once successfully represented Don King in court. He is also a drummer and a jazz music enthusiasm.