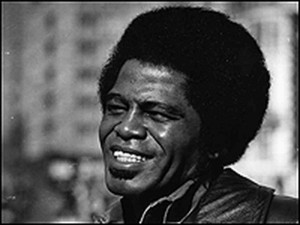 “Near year’s end, Brown played a show in Knoxville Tennessee. The scene afterward was utterly familiar: handshakes with local celebs, smiles and autographs for fans. An off-duty police officer working security brusquely told Brown to get out. It was time to close the hall.

The conversation with fans continued and the officer returned with more guards, again demanding that Brown leave. The singer responded, ‘That’s no way to tell a man to get out,’ but, soon, everybody did leave. Brown and two aides were standing in a parking lot when they were attacked by Knoxville police responding to a call from the guards. Two Brown employees were arrested for assaulting officers, and the singer was booked for disorderly conduct. When they returned to Augusta the next morning, they were bloodied and their clothing was ripped.

The next day, Brown told reporters his men were jumped from behind while he was counseling a group of young blacks to keep off drugs and stay in school. He announced he was filing a $1 million civil rights suit against the Knoxville police. The radio station he owned in Knoxville, WJBE, stopped playing music and went open mic on the event, airing calls from listeners who shared stories of their own interactions with local law enforcement. The pressure led to a march on city hall and then reforms in Knoxville police policies. The city dropped its charges against him; two years later, his suit was dismissed in U.S. District Court.” -From, “The One” By: RJ Smith