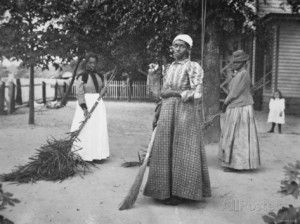 “I fact, a third of all free black people lived and worked in white households and those who did not labored to support themselves in a tightly restricted job market. Four out of ten black men were in the unskilled rank and their proportion in the skilled trades sharply declined during the first decade of the nineteenth century. White workers employed their numerical advantage and political power to push black laborers from occupations like street carting, in which black people gained a foothold during the labor shortages of the Revolutionary era, beginning an exclusion from the city’s transportation industries that lasted well into the twentieth century. Black women operated in a more restricted labor market, limited to domestic and service trades like household servants, seamstresses, and laundresses.” –From, “Slavery In New York”

[SIDEBAR: Stay tuned for a post on how Black New Yorkers combated this, later in the week. The post will be about the New York African Society For Mutual Relief.]