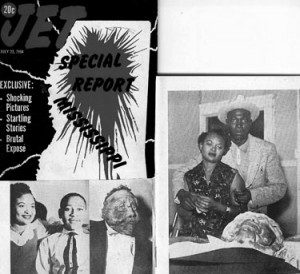 [SIDEBAR: I normally wouldn’t post such a graphic picture. However, it was Emmett Till’s mother’s wish for the world to see what racism and hate did to her son.]

“When she learned of Emmett’s murder, Mamie Till demanded that her son’s body be returned to Chicago. She defied the explicit orders of the Mississippi authorities, who had sealed his casket, and ordered that it be opened. Her son’s mutilated face displayed to the entire world what Southern racism had done. Thousands of Chicagoans walked by the open casket in 1955 at the Rayner Funeral Home, aghast at what they saw. Years later, Rosa Parks Told Mamie Till that the photograph of Emmett’s disfigured face in the casket was set in her mind when she refused to give up her seat on the Montgomery bus.” -From, “The Assassination of Fred Hampton” By: Jeffrey Haas