In his autobiography, Sidney Poitier discusses how Hollywood movie and television executives urged him to sign a “loyalty oath.” The “loyalty oath” required him to disassociate from Paul Robeson and Canada Lee, two super-talented activists who were labeled as “troublemakers” for heavily advocating for the African-American community.

Sidney Poitier described his relationship with Paul Robeson as being so close that Mr. Robeson often came to his house to visit and eat meals. Mr. Poitier considered the oath to be a bid to buy his soul. He professes that he didn’t sign the oath. 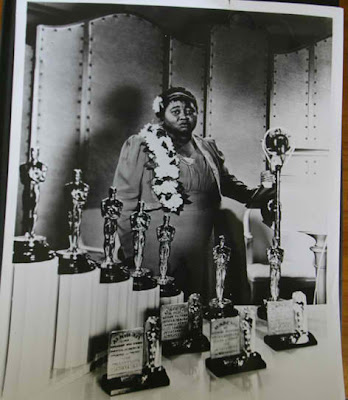 “Whoever controls the images of the Dark Feminine has a powerful weapon…black women themselves are often not the ones shaping that image. Rather, the dominant culture seems to pull those strings, leaving black women to decide whether to work with or against what the mainstream purports about them and the Dark Feminine. Often, they have done both at the same time, going along a little to survive and resisting as much as they can get away with. The most pronounced venues for this conflict are the theater, the cinema, the radio, and the television screen…Black women and their mythically influenced roles have been staples in all of them.

‘By The Way, Meet Vera Stark” is a play by Pulitzer Prize-winning playwright Lynn Nottage, which explores the choices that black actresses have had to make in order to practice their art, to work. The two main characters are actresses separated by talent and skin color. The title character, Vera Stark, is a gifted, light-skinned black actress who came to Hollywood determined to find refined acting roles, only to find those roles to be too few and far apart to live on. She takes a job as a housekeeper and drama coach for a less talented and less intelligent blond actress. The white actress comes to specialize in the roles of sweet and fragile girls, but as she ages those parts get scarce. There is a lot of buzz about a big new movie, a Civil War-era ‘Gone with the Wind’ type, the kind of movie that America loves. The white actress is preparing to read for a part. After too many years and too little acting work, Vera decides to try for a role in the film too: the role of a slave woman, exactly the type of role that she had vowed never to take. It is a matter of her survival- both physically and professionally.

Vera tells her friends and herself that she will pump enough dignity and grace into the role that Hollywood will see her talent and give her other, better roles. They are skeptical; they, too, are intelligent black female actors who are trying to survive. One, a brown-skinned woman, is a classically trained actress- a good one- who survives by doing piecework, sewing labels into shirts. The other, a light-skinned woman, has to consider passing. Vera wins the mammy role, the movie is a hit, and she becomes a star for playing a slave. Throughout the rest of her life and the play, we see her wrestle with the choices she has made, at turn vilified and honored by others.

I sat with Nottage during the first public reading of her play at Center Stage in Baltimore, and we talked about the difficulty of her message. As a writer, she wanted to show the artistry and intellect of women in that era who found that the only roles for them in Hollywood required an apron and a smile…Black Hollywood actors still say that they too often have to choose between their art and their dignity, to act in roles that make us all wince or not to act at all.” -From, “Fierce Angels” By: Sheri Parks