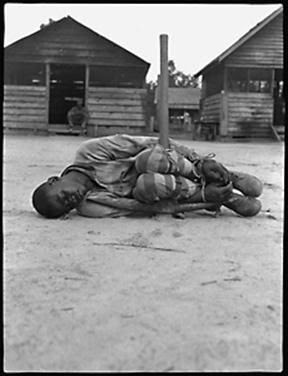 “By the end of Reconstruction in 1877, every formerly Confederate state except Virginia had adopted the practice of leasing Black prisoners into commercial hands. There were variations among the states, but all shared the same basic formula. Nearly all the penal functions of government were turned over to the companies purchasing convicts. In return for what they paid each state, the companies received absolute control of the prisoners. They were ostensibly required to provide their own prisons, clothing, and food, and bore the responsibility for keeping the convicts incarcerated. Company guards were empowered to chain prisoners, shoot those attempting to flee, torture any who wouldn’t submit, and whip the disobedient- naked or clothed- almost without limit. Over eight decades, almost never were there penalties to any acquirer of these slaves for their mistreatment or deaths…

Convict leasing adopted practices almost identical to those emerging in slavery in the 1850s.

By the late 1870s, the defining characteristics of the new involuntary servitude were clearly apparent. It would be obsessed with ensuring disparate treatment of Blacks,who at times in the ensuing fifty years would constitute 90 percent or more of those sold into labor. They were routinely starved and brutalized by corporations, farmers, government officials, and small-town businessmen intent on achieving the most lucrative balance between the productivity of captive labor and the cost of sustaining them. The consequences for African Americans were grim. In the first two years that Alabama leased its prisoners, nearly 20 percent of them died. In the following year, mortality rose to 35 percent. In the fourth, nearly 45 percent were killed.” -From, “Slavery By Another Name” By: Douglas A. Blackmon 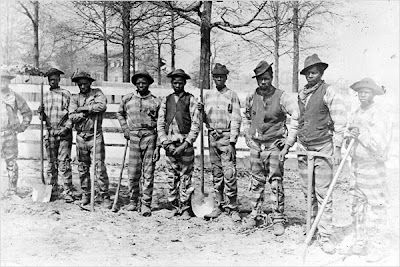 “In 1871, Tennessee leased its nearly eight hundred prisoners, nearly all of them Black to Thomas O’Conner, a founding partner along with Arthur Colyar of Tennessee Coal, Iron & Railroad Co. In the four decades after the war, as Coylar built his company into an industrial behemoth, its center of operations gradually shifted to Alabama, where it was increasingly apparent that truly vast reserves of coal and iron ore lay beneath the surface.

Colyar, like Milner, was one of those prominent southern businessmen who bridged the era of slavery and the distinct new economic opportunities of the region at the end of the nineteenth century. They were true slavers, raised in the old traditions of bondage, but also men who believed that African Americans under the lash were the key to building an industrial sector in the South to fend off the growing influence of northern capitalists.

Already, Whites realized that the combination of trumped-up legal charges and forced labor as punishment created both a desirable business proposition and an incredibly effective tool for intimidating rank-and-file emancipated African Americans and doing away with their most effective leaders.

The newly installed White government of Hale County- deep in the majority Black cotton growing sections of Alabama- began leasing prisoners to private parties in August 1875. A local grand jury said the new practice was ‘contributing much to the revenues of the county, instead of being an expense.’ The money derived from selling convicts was placed in the Fine and Forfeiture Fund, which was used to pay fees to judges, sheriffs, other low officials, and witnesses who helped convict defendants…

By the end of 1877, fifty convict laborers were at work in Milner’s Newcastle Coal Company mine outside Birmingham. An additional fifty-eight men had been forced into the Eureka mines he founded near Helena. A total of 557 prisoners had been turned over that year to private corporations by the state of Alabama.” -From, “Slavery By Another Name” By: Douglas A. Blackmon 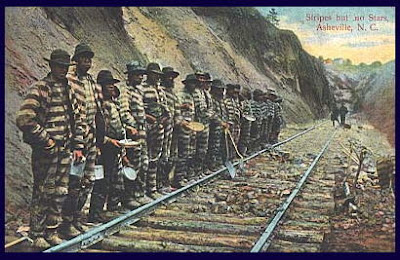 “Hardly a year after the end of the war, in 1866, Alabama governor Robert M. Patton, in return for the total sum of $5, leased for six years his state’s 374 state prisoners to a company calling itself ‘Smith and McMillen.’ The transaction was in fact a sham, as the partnership was actually controlled by the Alabama and Chattanooga Railroad. Governor Patton became president of the railroad three years later. Such duplicity would be endemic to convict leasing. For the next eighty years, in every southern state, the question of who controlled the fates of Black prisoners, which few Black men and women among armies of defendants had committed true crimes, and who was receiving the financial benefits of their reenslavement would almost always never be answered.

Later in 1866, Texas leased 250 convicts to two railroads at the rate of $12.50 a month. In May 1868, the state of Georgia signed a lease under which the Georgia and Alabama railroad acquired one hundred convicts, all of them Black, for $2,500. Later that year, the state sold 134 prisoners to the Selma,Rome and Dalton Railroad and sent 109 others to the line being constructed between the towns of Macon and Brunswick, Georgia.

Arkansas began contracting out its state convicts in 1867, selling the rights to prisoners convicted of both state crimes and federal offenses. Mississippi turned over its 241 prisoners to the state’s largest cotton planter, Edmund Richardson, in 1868. Three years later, the convicts were transferred to Nathan Bedford Forrest, the former Confederate general, who in civilian life already was a major planter and railroad developer. In 1866, he and five other rebel officers had founded the Ku Klux Klan. Florida leased out half of the one hundred prisoners in its Chattahoochee penitentiary in 1869.

North Carolina began ‘farming out’ its convicts in 1872. After White South Carolinians led by Democrat Wade Hampton violently ousted the last Black government of the state in 1877, the legislature promptly passed a law allowing for the sale of the state’s four hundred Black and thirty White prisoners.” -From, “Slavery By Another Name” By: Douglas A. Blackmon 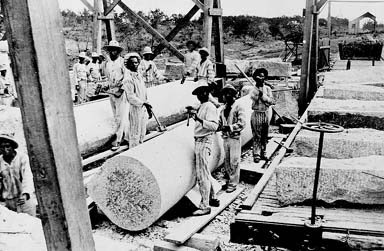 “With the southern economy in ruins, state officials limited to the barest resources, and county governments with even fewer, the concept of reintroducing the forced labor of Blacks as a means of funding government services was viewed by Whites as an inherently practical method of eliminating the cost of building prisons and returning Blacks to their appropriate position in society. Forcing convicts to work as part of punishment for an ostensible crime was clearly legal too; the Thirteenth Amendment to the Constitution, adopted in 1865 to formally abolish slavery, specifically permitted involuntary servitude as a punishment for ‘duly convicted’ criminals.

Beginning in the late 1860s, and accelerating after the return of White political control in 1877, every southern state enacted an array of interlocking laws essentially intended to criminalize Black life. Many such laws were struck down in court appeals or through federal interventions, but new statutes embracing the same strictures on Black life quickly appeared to replace them. Few laws specifically enunciated their applicability only to Blacks, but it was widely understood that these provisions would rarely if ever be enforced on Whites. Every southern state except Arkansas and Tennessee had passed laws by the end of 1865 outlawing vagrancy and so vaguely defining it that virtually any freed slave not under the protection of a White man could be arrested for the crime. An 1865 Mississippi statute required African American workers to enter into labor contracts with White farmers by January 1 of every year or risk arrest. Four other states legislated that African Americans could not legally be hired for work without a discharge paper from their previous employer- effectively preventing them from leaving the plantation of the White man they worked for. In the 1880s, Alabama, North Carolina, and Florida enacted laws making it a criminal act for a Black man to change employers without permission.

In nearly all cases, the potential penalty awaiting Black men, and a small number of women, snared by those laws was the prospect of being sold into forced labor. Many states in the South and the North attempted to place their prisoners in private hands during the eighteenth and early nineteenth centuries. The state of Alabama was long predisposed to the idea, rather than taking on the cost of housing and feeding prisoners itself. It experimented with turning over convicts to private ‘wardens’ during the 1840s and 1850s but was ultimately unsatisfied with the results. The state saved some expense but gathered no revenue. Moreover, the physical abuse that came to be almost synonymous with privatized incarceration always was eventually unacceptable in an era when virtually every convict was White. The punishment of slaves for misdeeds rested with their owners.” -From, “Slavery By Another Name” By: Douglas A. Blackmon